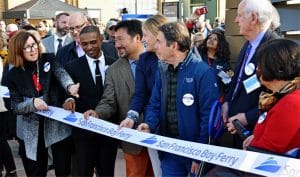 Courtesy of Mike Aldax, Richmond Standard
The excitement on the Richmond waterfront on January 10th was palpable, as hundreds gathered to celebrate the launch of the brand new ferry service to downtown San Francisco.
The first ferry left at 6:10 a.m. from the new $20 million terminal located next to The Craneway Pavilion at 1414 Harbour Way South. The ferry continued on to the San Francisco Ferry Building, a roughly 35-minute trip that was depicted in a flurry of photographs and video posted to social media. Richmond Mayor Tom Butt, credited as one of the ferry terminal’s champions, filmed what he called a smooth ride on a beautiful morning.
“This is the first time in 61 years that we have sustainable ferry service back in Richmond,” Contra Costa County Supervisor John Gioia said. “It’s really a great day.”
To start, San Francisco Bay Ferry Service is making four runs from Richmond to San Francisco during morning commute hours, and four runs from San Francisco to Richmond in the evening commute hours. High demand could expand service in the future, officials said.
The ferries are launching from a terminal that features a new ADAcompliant gangway and ramping system, passenger shelter, 362 spaces of free parking and a new ADAcompliant kayak launch ramp.
Elected officials lauded the ferry as one of many solutions needed to address excessive traffic along the Interstate Highway 80 corridor.
Assembly member Buffy Wicks said it recently took her 90 minutes during rush hour to drive from South Berkeley to Hercules.
“When people are out on the water, they are not on Interstate 80,” Wicks said. “We need an all-the-above approach when it comes to our transportation needs.”
The ferry terminal project was funded through various sources, including state Proposition 1B, U.S. Department of Transportation funds, and $12 million in Regional Measure 2 bridge toll revenue. Operating costs for the next 10 years will come from both fare revenue as well as Contra Costa County Measure J funds.
So far, reviews of the new ferry service have been positive. Cesar Zepeda, president of the Hilltop District Neighborhood Council, called his ride clean, safe, and relaxing. Others echoed Mayor Butt’s sentiment, saying their ferry trip provided a front row seat to a stunning sunrise.